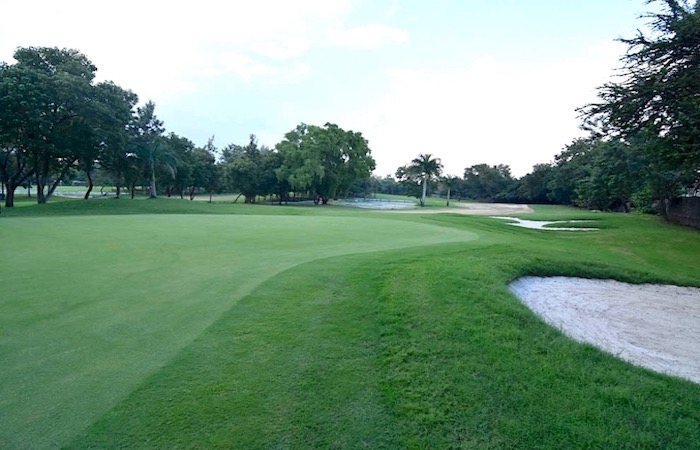 Pune, located 170 kms south of Mumbai has been the cultural capital of Maharashtra since ages. Now a bustling city, the Osho Commune has put the city on the spiritual map and gets many overseas neo-pilgrims visiting it as well.

The western city of Pune has a wonderful course – the Poona Club Course is spread over just 94 acres of land and hence is not very long. But to economise on space most of the holes on this par-71 course yardage 6604, have been given interesting shapes. That has made it a thinking man’s course. The greens here are among the fastest in Asia. The opening hole, a par-4 is a tough starting hole . There is a wall guarding the left of the narrow fairway, while a thick clump of trees runs along the right side. The green is fairly large and elevated and thick rough and small ditches punish those who overshoot..

Poona Club Golf Course is one of the oldest golf courses in India, situated within half an hour’s drive from major industrial areas of Pune and very close to the airport and the rail way station. Though the course is within 5 minutes drive from the city, it is in a quiet area. The course is a 6,198 yards par 71, 18 hole golf course spread over 90 acres of land, which is the largest in the Western Region. The exact date of establishment is not known, but based on available records, tournaments were being played since 1920, the first being the RWITC CUP (Royal Western India Turf Club Cup).

Originally the course was spread over nearly 135 acres of land, part of which was later taken over by the Government for housing development.

When the British left India, Poona Club was thinking of giving up the golf grounds, but thanks to a handful of golfing enthusiasts, the course still exists and over 30,000 trees have been planted since the course was relayed between 1980-85 during the captainship of the late Mr. C.S.Kirloskar.

Poona Golf Course Competitive golf is played throughout the year and over 30 tournaments are held, the most prestigious being the Maharashtra Amateur Open Golf being played since 1957, in which leading amateur golfers from all over India participate.

There are four golf courses in Pune, but the Poona Club Golf Course is the only course available to all golfers, including foreign visitors. The weather being cool and pleasant, golf is enjoyed throughout the year, unlike at many other places. Pune being a major industrial town and close to Bombay, the flow of visitors is continuing all the time.