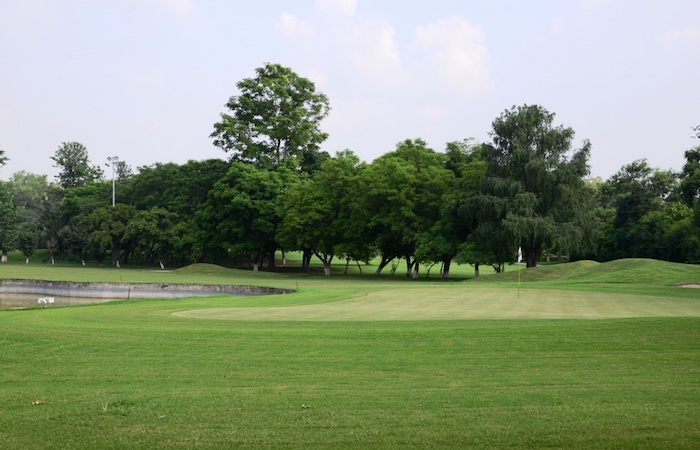 The 7,202-yard, par-72 course is an environmental lung for the city with its rich and varied species of trees and shrubs. Right next to the course is the Chandigarh Golf Academy Driving Range, an excellent facility boasting of a humongous green ( some say it is the largest in Asia) for your short game practice. The course is known for its tight fairways, which are lined by trees and thick rough. There are quite a few dogleg holes here, but none gives the players a chance to take the shortcut as tall trees almost always guard the corners. The Club also possesses one of the longest par-5s in India, the seventh hole, which measures 613 yards, where you have too place your every shot. Chandigarh Golf Course is one of the busiest golf course in India, where over 200 golfers tee of everyday. Chandigarh Golf Course is also host of many professional and amateur events and also have produces some of the finest golfers in India such as Jeev Milka Singh, Sujjan Singh, Amritinder Singh, Amandeep Jhol; Ajeetesh Sandhu and many many more.

The city of Chandigarh, is the ‘first planned’ city of India and is the capital of Punjab and Haryana. The city is regularly hailed as a marvel of city-planning. The roads are well-laid, lined with endless rows of trees, shrubs an boulevards, and the buildings are strategically and ingeniously set against the backdrop of the mountains. The white domed temple of Goddess Chandi Devi that stands on the slope of a hill, situated in the north-east of Chandigarh, is where the city obtains its name Chandigarh. Amongst its many splendours is the Rose Garden. Zakir Gulab Bagh is Asia’s largest rose garden with thousands of the loveliest rose blooms.

The Sukhna Lake, a seasonal stream coming down from the Shivalik Hills, is also a great attraction. It attracts migratory birds from lands as far as Siberia and elsewhere.