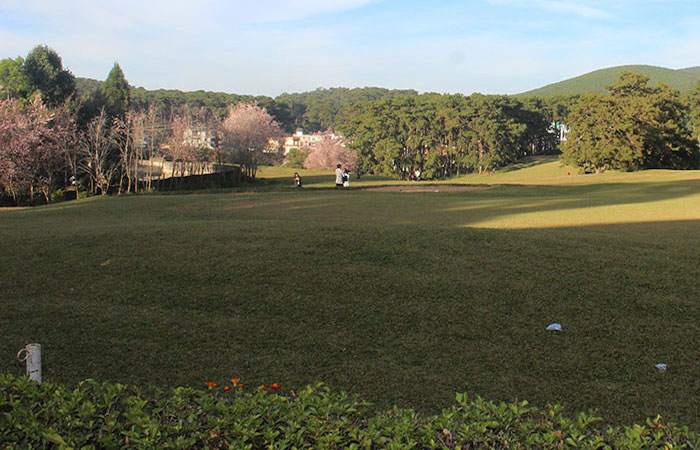 Close to the Polo Ground is one of the most attractive locales of the town, the Shillong Golf Club. Golf was introduced to Shillong in 1898 by a group of British Civil Service officers who initially constructed a nine hole course at an area called Laban. lt was only after the first world war that Shillong gained popularity as a golf resort for European golfers from East Bengal and Calcutta, and in 1924 the present 18 hole course with its picturesque club house was inaugurated.

The layout of the new course was done by Capt. Jackson and C.K.Rhodes, who were remarkably successful in preserving the natural beauty of the area while giving it an excellent layout. The course is set in an undulating valley covered with thick groves of pine and rhododendron trees. The tight fairways are carpeted with an indigenous species of lo cal grass which hardens the soil and makes the course tough to play. The longest hole on the course is the 594 yards, sixth, which makes it an extremely trying hole, and also one of the longest in India.

The tight fairways are difficult to negotiate in any case, but the task is made even more trying by the number of ‘out-of-bounds’ streams that criss-cross almost every fairway. Most of the approaches are uphill shots, and even veterans opt to play safe. The greens are as challenging as the fairways. They are lightning fast and are invariably trapped by heavy sand bunkers.

The 372 yards, par five, ninth hole is a dog leg, and one of the most picturesque on the course. The tee off is from a pine grove elevated some 200 feet above the fairway. The tiger line is onto a steep ridge and to the left of the single pine tree which demarcates the common eighth and ninth fairway. The second shot is placed into the elbow of the dog leg which is in a valley, and from where the green is now visible on a hillock ahead. The third stroke has to be lofted to gain height as well as negotiate the tight fairway. It requires a good chip and a lucky putt to get a par on this hole, as the area around the green is uneven, and the green itself extremely fast. Not only is the Shillong course scenic and enjoyable, it’s also challenging. Obstructions don’t come only in the form of bunkers and trees, but also rain. Shillong is just 56 km from the wettest place in the world!