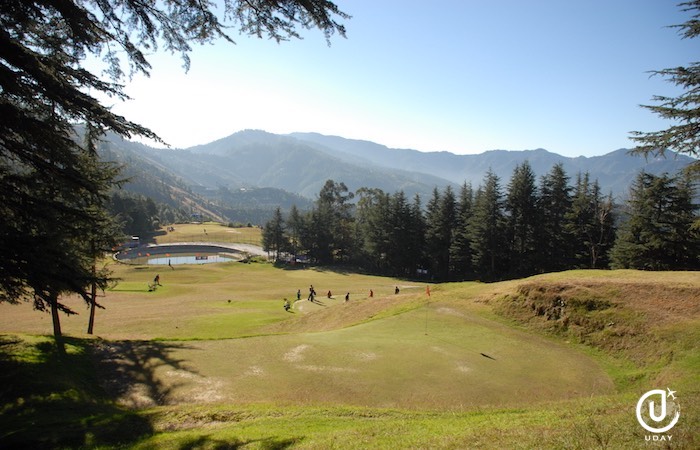 Naldehra Golf Course
Dwelling on a panoramic location , the hilly town of Shimla is surrounded by green pastures and snow-capped peaks. The spectacular cool hills accompanied by colonial era structures create a dramatic aura, making Shimla very different from other hill stations. The Mall, packed with shops and eateries, is the center of attraction of the town, and Scandal Point, associated with the former Maharaja of Patiala’s escapades, offers a view of distant snow clad peaks.

Church in Ridge area ShimlaThe main attractions here include the Christ Church; the St. Michael’s Cathedral that was built in 1846-1857 and is the second oldest church of India; the Himachal State Museum & Library; the Jakhu temple, dedicated to Lord Hanuman, is at an altitude of 2,455m, near the highest point of Shimla ridge and Lakhar Bazaar adjacent to the Ridge is popular for its woodcrafts and souvenirs.

Close to the Viceregal lodge is the Himalayan Aviary or the Himalayan Bird Park. This park is a natural habitat of numerous species of birds found in Himachal such as Himalayan Monal, Pheasants, Peafowl and the National Bird of India-the Peacock.

The best time to visit Naldehra Golf Club  is from April to November.

Adventure in the hills: Shimla was the summer capital during the British Raj. Since no English township could be complete without a golf course, a suitable site was finally chosen at Naldehra, 23 kilometer from Shimla. The course is carpeted by fine springy turf, which requires little maintenance. The par 68 Course is basically located in a bowl and has nine holes, which can be played twice for a 18-hole experience.