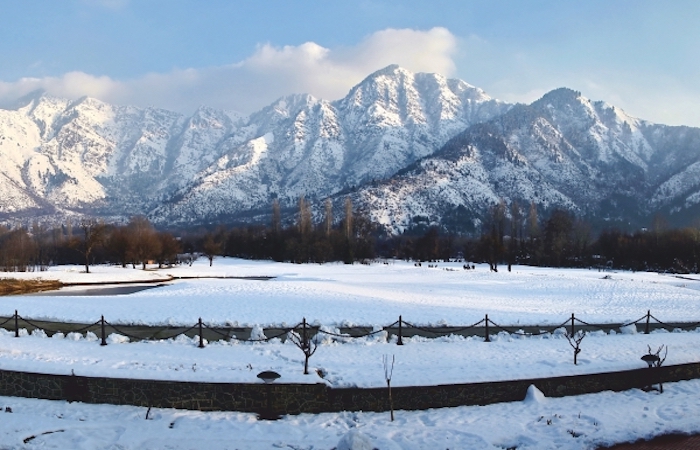 Gulmarg’s legendary beauty, prime location and proximity to Srinagar naturally make it one of the premier hill resorts in the country. Gulmarg, a mountain resort of exceptional beauty- has the highest green golf course in the world, at an altitude of 2,650 m, and is the country’s premier ski resort in the winter. On way to Gulmarg travellers generally stop their vehicles for a few minutes and look out a spectacle of snow-covered mountains, almost within touching distance.

Established in the early days of the British rule by Sir Neville Chamberlain, K.C.B., the Gulmarg Golf Club has attracted golfers for almost a century. A lush green bowl covered with a variety of alpine flowers and criss crossed by snow fed streams and rivulets; gently undulating slopes carpetted with a natural mossy turf, and a crisply cool bracing weather!

Redesigned by the famous golf architect, Peter Thompson, Gulmarg now has a 6,760 yards, par 72, 18 hole golf course. The highest course in the world, it also boasts of India’s longest hole, a par five, 610 yards. Unlike most of the other par-fives on the Gulmarg course, the eighth plays much longer than its 610 yards because of the uphill factor. The green course includes not only the pre-defined rivulets, streams and ponds, but also herds of sheep which eliminate the need for lawn mowers and keep the fairways in top condition.

A golfer at Gulmarg also has to beware of the local crow which does not hesitate before taking off with a ball from the fairway, presumably mistaking it for an egg. The most interesting and trying hole on the Gulmarg course is undoubtedly the 17th. Although not very long, it calls for some precise hitting to land on the green which is precariously placed on the edge of a cliff. The 18th hole, a par five, is an exhilarating experience. It’s downhill travel from St. Mary’s Church to the club house, a drop of 300 feet. The Gulmarg Golf Club is well equipped to handle the holiday golfer and arrange for the services of caddies and coaches; golf sets can also be hired at very reasonable rates.

Amenities at the club include a bar, library, lounge, table tennis, lawn tennis and a putting green. The Gulmarg course is usually open between April and November, as it is covered by snow for the rest of the year and its gentle slopes are transformed into mini ski runs for beginners.